Skip to content
For many companies Automation testing is an attractive term, they say “We have automated our application up to 80% and reduced the manual effort tremendously”, some big companies like Microsoft says, we have automated the Windows 8 mobile OS and tested it for 10 million hours before release, it’s really an catchy quotes and almost all companies badly need this, but the truth is, while it comes to reality all this quotes fades out. The real problem is not with the automation testing tools or the process, it’s how the companies are looking at the automation itself, the automation should come hands on hand along with application development for long term rather short term. Let’s discuss first about the short term automation testing nature of application Short-term automation Since most of the Service based/Product based (Agile) companies are now focusing on automation testing to reduce their manual effort, they start doing something like this. But for every release when there is a UI change in application, again they do the following As you could see above there are lot of repeatable “baby sitting” operations, which an automation engineer has to do on daily basis, life of automation will be happy until he starts to write a framework and make complete (at least 80%) application automated, but before a take a sigh of happiness, the UI of application changes and his work starts once again. The problem is, many Service or Product based companies are focused on resolving the day to day problem using automation testing for “Short term”, investing less in automation, than seeing the big picture of real automation, in fact, UI based automation is “NOT” going to reap the benefit as the application is more rapidly changing to support different kinds of devices.

So what is the best way to automate a rapid changing application? How to overcome all the above sited issues? What possible steps we can take to make automation engineer feel more comfortable? 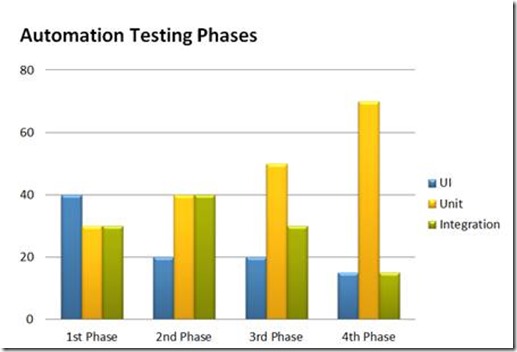 As you could see above, the UI testing starts to reduce from 40% to 15%, but the Unit testing of application has increased from 15% to whooping 70%, which clearly indicates that, automation testing in any company should focus on Unit testing rather the fragile UI testing itself, so that the benefit reaped out of the automation is higher and long term. Well how? As the application is transforming to support multiple devices as opposed to just one single device in early 2000’s which was just Personal computer, now people are interested to work on any device ranging from cell phone to tablet and from table to PC’s. Which means the application will change for each and every application, but the “Core” applications execution engine remains the same, and that’s where Unit testing has to be taken care as the most important priority. To summaries, for any Long term automation project, UI automation should be taken in least consideration, but the applications core execution engine (Unit testing) should be taken in higher priority, which needs to be fully tested. This will make the automation test engineers life more comfortable and even more challenging. Please leave your comments to improve the post Thanks, Karthik KK