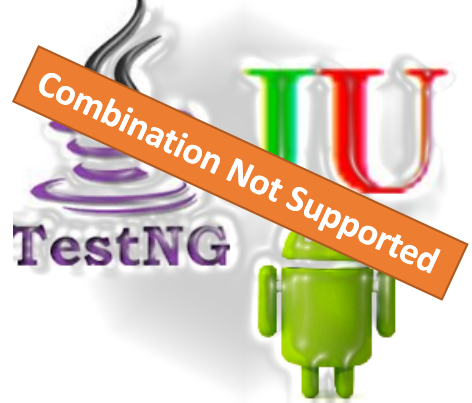 This post is more like a solution for the problem I faced while automating android application. Since I am very familiar with Selenium with TestNG, I thought of implementing the same concept in Android automation as well, I thought it’s going to be straight forward to implement, but at the end it’s NOT.

What I tried to establish

I tried to implement TestNG in Android Test project, as I did previously in Selenium

TestNG in Android Test Project didn’t worked!!! I got exception as As you could see the exception message reported by debugger doesn’t make any sense

What was the Issue?

Not sure, but for now, TestNG with Android Test Project will not run L

Well I think the issue really makes sense. As you could see, while creating an Android Test Project, we are actually creating a project which built with JUnit as you could see the screenshot

Then what I did?

Well, I wrote my custom execution engine which will do the execution of specified method from an Excel sheet. I hope this post will give you all an idea of how not to break head in trying to implement Android test project with TestNG. Thanks, Karthik KK

5 Replies to “Can I run test using TestNG in Android Test Project ?”