I was invited for Amazon tech talk happened at ITC Grand hotel Chennai yesterday (23rd April), the first thing I like about the conference was the place they chose to host (which was ITC Grand), next was how they greeted people and overall ambiance for the conference (not much crowd) and finally the convincing speech about Kindle in combination with their own AWS. Here is the overall experience of mine with some more details

At reception of the conference I got a little welcome kit, which was pretty decent and here is how it looks like 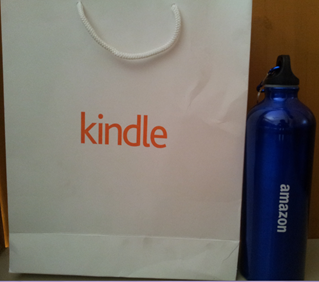 Tech talk started with Ice breaker quiz (Mostly about Amazon) and some audience were very eager to grab the prizes. The first speech was from Samir Mehta who is the Vice President of Digital Content Platform at Amazon. He got 20 years of experience in digital content related business.

Samir was more focused on two most important areas In content publishing he revealed that most of the kindle’s digital content embedding happening in Amazon India. He also added the content formulation and Metadata extraction, audio and video compression and its related operations are taken care by Amazon India. In Platform services he revealed that the Kindle’s pre-transaction, base price calculation for every contents, whispersync and other added operations are performed by Amazon India.

Samir also added that Amazon India is the 2nd largest operation center next to Seattle.

There were some Q&A session happened after the speech of Samir and that was very interesting though, since that actually gave a chance for Amazon engineers to showcase how hard they are working behind the scenes while we read Kindle books online. The next half of the session was with Venkatesh Kancharla who is currently the Senior SDE at Amazon. He was one of the early engineers who joined in 2006 when Amazon Chennai just started. He was known to others as Venki and his speech was more about how the early Kindle was transformed from baby steps till current Amazon Kindle paper white running over AWS, he started with case study on addressing their problem they are facing and getting some different thoughts from audience on how to improve it, but I think since they were running out of time, the topic was completely deviated and ended up with Q&A.

Overall I like the reply a manager (I believe its Mani) who gave the answer for a question, the question was from one of the audience its “Why are people (at least in India) are not buying kindle (mostly) and what makes it different from Kindle application (for Android, Windows, IOS) and Kindle itself?” Well, the answer from the Mani was, “Everybody has smartphones right now, it has camera and best music players, but still people are going with Digital Cameras for taking photographs and iPod for playing music, it’s because they need a device which is meant to be for the particular purpose, and the same is for Kindle, it has a purpose which is for reading, since even if you have a tablet or iPad for reading books, the battery will last for only 8 hours, whereas Kindle on the other hand will last for 1 month to 2 months, since its meant for that” Well, Seems like Amazon also has plan in road map and is also working with Government of India to bring Kindle for schools (CBSE) to bring in all books within it. This will help student because they don’t have to lift the heavy load of book every day to school (Since I did in my school days L). It is also a fact that Kindle for schools is already implemented by Amazon at Brazil.