Team Foundation Server provides a set of collaboration tools that work with your existing IDE or editor, so your team can work effectively on software projects of all shapes and sizes – Microsoft TFS is more of a

TFS as a Version control (But not just)

Gone are those days with Microsoft Visual Source Safe (VSS), where we check in code and it store data in a terrific technology in the backend. But with TFS, all the codes are stored by powerful and our most known SQL Server We can check-in and check-out our code with TFS within Visual studio IDE We can do branching, Merging, Comparing code, Labeling and shelving our code using TFS

Using TFS one can do a very clear project management, since every team member in the project will be in the same page. Since TFS Web interface will be so cool, that you get all the information you need and it looks something like this

TFS has another great feature which is Automated build management Meaning every time your developer check-in their code, TFS is intelligent enough and make sure it compiles and creates a automated build for you This process is otherwise called as Continuous integration Meaning, your code is monitored for every single build (close to be like a release build) and all the builds will have Code change list, which help QA to identify the issue sooner !!! 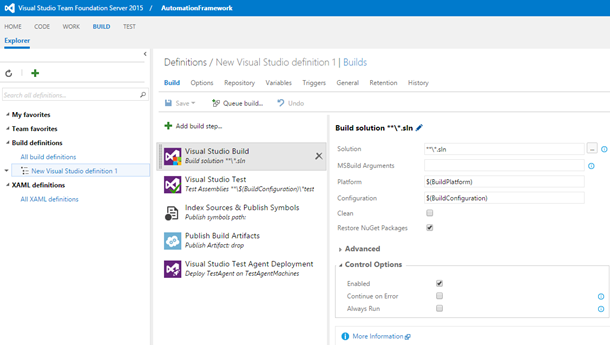 TFS is not a system for just developers, but it’s a close friends for QA in fact. TFS works more similar to Quality Center of HP, but its more than what QC does TFS Testing features are targeted for both developers and testers like

Lab management is especially useful while you want to run your test in multiple machines with different configurations like OS, Browsers etc Lab management in TFS works to make sure your builds are deployed in remote machines (which you configure in your build template of your project) And run the test in remote machines as well (provided you have Test controller and Agent configuration done) Lab Management works with Hyper-V and SCVMM, so that you can run test in virtual machines. Well, its more awesome, since it does lot of stuffs like snapshotting etc.

So Finally TFS is truly an ALM

As that said, TFS proves to be a real ALM system, since it helps to do Thanks for reading the post and watching the video!!! Please leave your comments and let me know if there is anything I should update in this post. Thanks, Karthik KK