Coded UI record and playback feature is much like the feature available in popular testing tools like QTP, Test Complete and SoapUI, where Coded UI records all the user actions via Coded UI Test Builder.

Coded UI Test Builder is the recording option which is found in other testing tools like QTP and Test Complete as well. It will have a 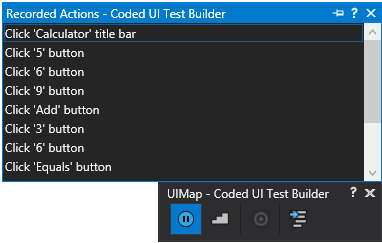 All the recorded actions are stored in a separate class file called UIMap in the project.

UIMap is more like an Object Repository in QTP and Name Mapping in Test Complete were UIMap stores all the objects of Application Under Test (AUT) as a class file. The UIMap looks something like this

UIMap will have hierarchy of the controls identified, this will be helpful to locate each and every controls and their parent child relationship. We can also locate the element from UIMap to actual UI of AUT as shown below

UIMap actually has two classes as shown below

These two classes are auto-generated and modification to UIMap.Designer.cs file will revert back once you do a new recording using coded UI Test Builder. This you can see in the file instruction itself, but user has the leverage to change the UIMap.cs file and work with the objects and properties from UIMap.Designer.cs file.

Technically these two classes are partial class files and are pretty much dependent.

How to Execute the Code?

So how to finally execute the recorded code?

Well, just go to your CodedUITest.cs class file which you have created and right click the test method and click Run Test option as shown below

That’s all guys, this way we can perform record and playback using Coded UI testing in Visual Studio 2013. Please leave your comments and thanks for watching the video and reading the article !!! Thanks, Karthik KK